The Moore’s, Prosper, Texas residents, founded BINT, a blessing community (sou-sou), in June 2020. They solicited membership through weekly zoom calls with DJ Marlon Moore starting the zoom call energetically by saying, “You received an invite here because someone loves you, say thank you in the chat.” Marlon stated that this was their way of taking attendance and tracking who you were.

Before starting the presentation, the Moore’s explained that they are a private community and an all-black community especially and specifically created for us. At the start of the presentation, LaShonda Moore explained the concept of BINT and dismissed any thought of it being a sou-sou. She established that BINT was not like other groups we may have heard about, but a ‘micro-economy and link funding community.’ They explained their blessing circle concept.

Invite people into the circle. No one would lose money if they joined (blessed in), and a refund would be granted anytime because a built-in plan had been structured. The blessings, they said, were legal with the IRS Tax code. The Moore’s offered a guarantee, urging us by saying, “You won’t lose your money with us; invite your family and friends to the Zoom.” The Moore’s even offered help, stating that if a member didn’t have a minimum of 2 family/friends (new fires) to invite, they would give you your first two fires at no. All one had to do was to bless in at $1400 for a spot, and when blessed out, will receive $11,200 within 7 to 10 days, depending on when the Moore’s split the boards (blessings).

The Moore’s touted us with their celebrity status, who they knew in the industry, and the types of professionals in the community, such as doctors, lawyers, nurses, educators, military, agents, and people who worked for the FBI, IRS, and their team of lawyers.

With immerse confidence; they reassured us all, saying, “You have nothing to worry about with BINT.”

July 2020, BINT membership grew exponentially. Thousands of people had blessed in and blessed out. Those who joined initially in June 2020, majorly the Moore’s family and friends, received numerous blessings, making what we now believe were millions of dollars. The Moore’s and their team of administrators controlled everything and completed the boards by hand, publishing them weekly.

With membership now in the thousands, the Moore’s decided to move to the BAND app. They explained that this was to cut the cost of zoom subscriptions and efficiently communicate with the growing group, having the community’s best interest at heart. With the growth, the Moore’s realized they needed to automate most processes. They introduced Nehemiah Thompson, a developer, and his software/app ‘Conecmi.’

In August 2020, BINT continued to accept membership in the BINT central community, BINT waiting room, and BINT University but stopped releasing boards. The Moore’s informed us that each person would be required to pay a monthly Conecmi subscription fee of $85. They promised that once the software and app were up and running, they could split the boards with a “click of a button.” They urged us to subscribe, saying $85 was a nominal fee compared to the blessing of $11,400.

BINT sub-group chats with  BINT administrators governing each group was created in the BAND to help ease communication with all the members.  The Moore’s announced that BINT was now a software company. They published rules for the community, known as the BINT BIBLE, which included how to request a refund and other stringent policies. If anyone violated their rules, the violator would be “kicked out” of the community and if kicked out, they may receive a refund or not.

Come September 2020; the community began to ask questions. With access to Conecmi, all the boards showing the thousands of spots the Moore’s, their family and friends, and their admin were being blessed out, was revealed. Conecmi exposed the size of the community, including the number of people waiting to get on board (the sparks) and family members and friends who were moved to various boards without our knowledge. This new information incited more questions and aroused distrust. Members believed that the Moore’s placed people where they deemed necessary to benefit themselves. Concerns and queries went unanswered because the Moore’s controlled the narrative, the community, BINT Band, and the subgroups. The Moore’s threw blame unto the community for stalled boards, greed, and insinuated that certain individuals were inciting fear in the community, and then forbade us from communicating with each other by deactivating our DMs monitoring group chats. Once they suspected anyone was negative and against them, they would quickly deactivate their accounts.

To keep the boards moving, the Moore’s, introduced Kill Boards – to combine stalled board and Fusion – where half boards with half the people would fuse back together and become full boards. The Moore asked for the community’s support to follow our spots on the Fusion boards and not give up. The Moore’s had our blessings, the blessings of our family and friends, and Conecmi fees, all tied up in BINT.

As of October 2020, if a refund was requested, you were immediately put out of the group, and the return of your money was unknown if at all considered. Individuals were fearful of expressing concern or speaking up not only because they didn’t want to lose the money they had invested but, more importantly, losing family and friends’ money.

Some sub-group chats started their blessing groups. The Moore’s had spies in the unapproved sub-group blessing circles and became confrontational, threatening, and challenging to the community.  If a member were found amongst the unapproved blessing group, they were immediately kicked out of BINT. The Moore’s started charging community members if they needed fires, $700 per fire, earning the Moore’s a third source of income.

November 2020, the Moore’s tried to defect from the truth by creating 35 BINT Subgroups and BINTs Giving platforms. During that time, the Moore’s continued to take luxurious trips, throw lavish parties, and buy expensive gifts for each other.

In December 2020, The Moore’s celebrated Christmas as BINTs Xmas and, while still vacationing, announced a restart for Jan 2021.

As January 2021 drew near, BINT Scam was announced. The purpose of the BINT scam is to assist the people in the BINT community, who were cheated, receive their refunds as promised by the Moore’s. Through BINT blessings, The Moore’s generated approximately $40M, and Nehemiah Thompson received roughly $5M in Conemci fees.

As of February 2021, the Moore’s and Mr. Thompson became unreachable by phone and private social media pages. The Moore’s silenced all working for them! They believe they did nothing wrong and are saying they owe us nothing! The Moore’s continue to portray themselves as the victims and still promote BINT and CONECMI and The Reset/Restart! 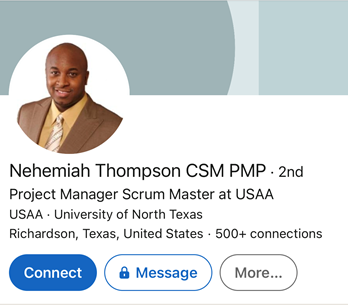 Thank you for using Conecmi! We are pleased to have been able to serve you and BINT.

Sadly, we have now determined that Conecmi is no longer a good fit for you or your organization.

Accordingly, all active subscriptions for you and the BINT organization are hereby cancelled effective as of February 1, 2021.

However, as a courtesy and to minimize any disruption, Conecmi will give you and the BINT organization up to 60 days to use the Conecmi services in accordance with our Terms of Service while transitioning to another tool at no cost without interruption (so long as there is no breach or violation of our Terms of Service).

All access to Conecmi will automatically terminate on April 1, 2021 without further notice.

BINT CTO, Nehemiah Thompson, scammed members with $85 monthly mandatory subscription fees in Concemi. He collected these fees from Aug 2020 – Mar 2021. Being the wizard behind the software, he knows the truth.

Mr. Thompson applied for a Conecmi trademark (USPTO Serial #90179474), profiting from his scam.

BINT App – Managers – The Moore’s leadership team continues to be a part of the scam. We have the photos from the BINT App before deleted. 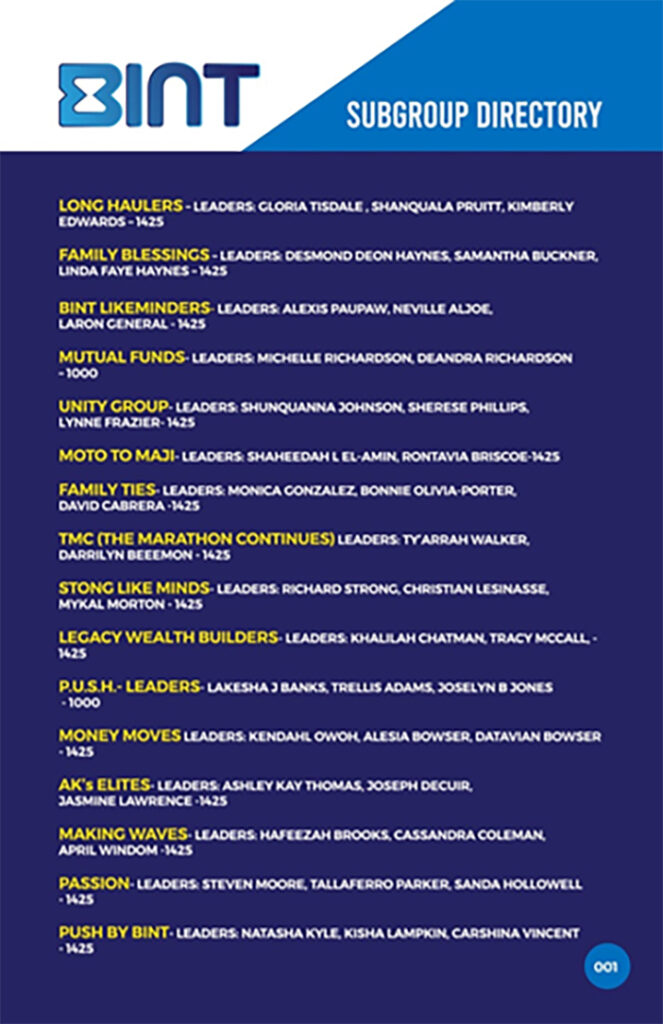 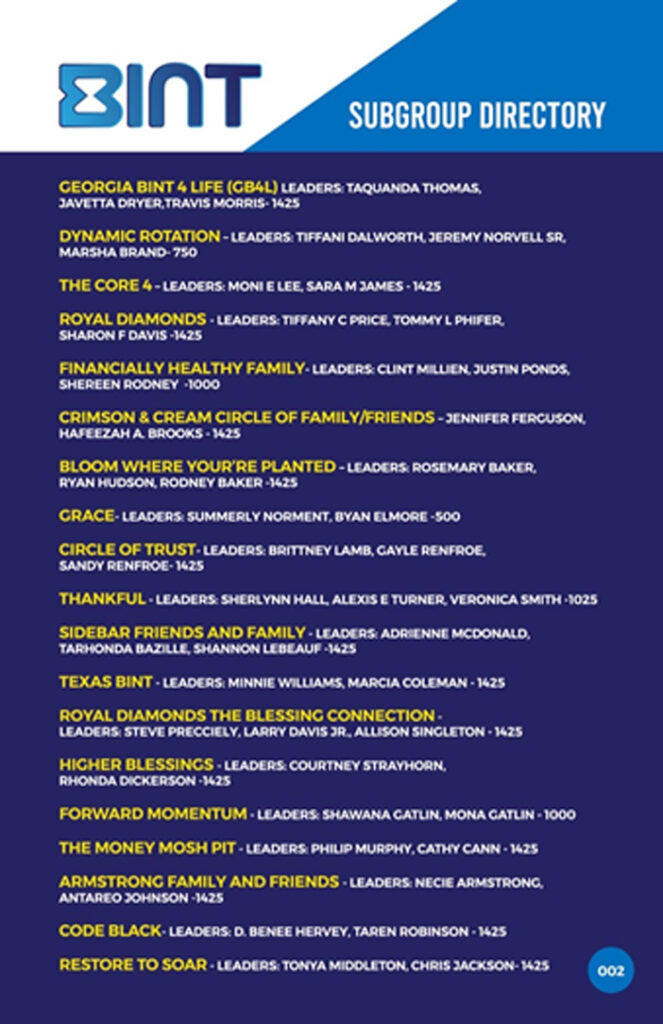 The Moore’s taught others their scam by creating 35 BINT subgroups and appointing 91 BINT subgroup leaders. More of our people duped!!!

Documents on this site are a collaboration of evidence from various sources. They include BINTapp, BINT Band, BINT Zoom calls, BINT staff text messages, etc. Recently, documents, videos, pictures, and chats were deleted from BINTapp and the BINT Band. 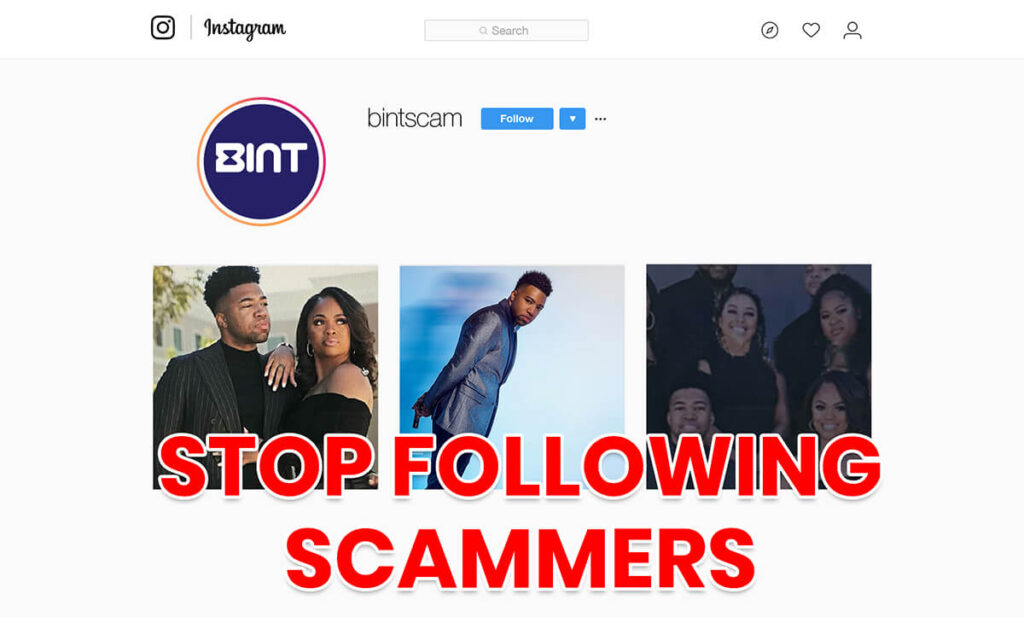